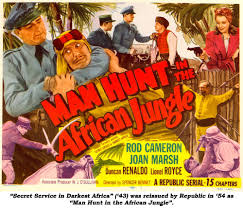 An American secret agent travels to Africa to infiltrate a Nazi spy ring. Originally released as Secret Service in Darkest Africa, the setting and the Nazis/Arabs in this serial were the inspiration for Raiders of the Lost Ark! This has plenty of deathtraps and dynamite that still pack a punch, including an electric torpedo, a steel-toothed execution wheel, a ray cannon, and a dynamite-laden graveyard! The hero is Rod Cameron as Rex Bennett, from G-men vs. the Black Dragon! Includes the famous scene in which our hero Rex demonstrates exactly what he thinks of a portrait of Hitler!

Lonely Wives (1931)  A lonely husband, whose wife has been away, hires a look-a-like impers..